In continuing your browsing of this site, you accept the use of cookies to offer you suitable content and services and realize visits statistics.Learn more about cookies.
Biodiversity
Geodiversity
Overseas
The SINP

Search data on a program

France occupies a unique position due to the variety of its overseas communities and, therefore, its natural environments: from the subarctic (Saint-Pierre and Miquelon) to the Antarctic (Adélie Land), passing through the tropical zones of three major oceans. In spite of limited land surfaces, that are often insular, the biodiversity presented in these territories is often remarkable and confers a great responsibility on France in the field of conservation at international level. 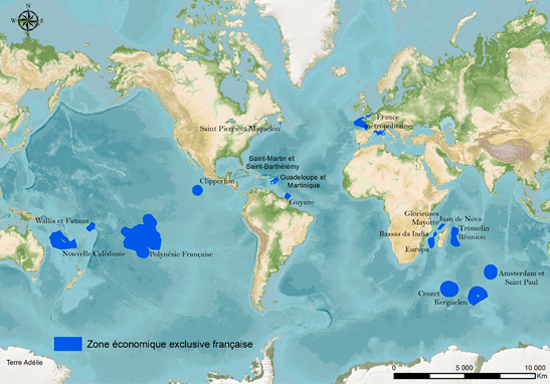 Terrestrial and marine biomes of the overseas communities, almost all of which are located in the intertropical zone, form part of fragmented biogeographic regions: these factors are a source of their great biological diversity, both at international level and in relation to metropolitan France. Over a total surface area that is however more than 4 times smaller, overall, the overseas communities are home to more species for all groups than France, and it can be said that around 80% of French biodiversity is overseas.

The overseas marine environment covers a huge area: more than 10 million km², which represents 97% of France's exclusive economic zone. It brings together an exceptional biological wealth, particularly due to the presence of 55,000 km² of coral reefs and lagoons (10% of the world's reef-lagoon ecosystems, 20% of the world's atolls).