The TVB programme (part of the European green and blue infrastructure programme) is a public policy launched in 2007 and subsequently included in the French Environmental code in 2009. It aims to reduce fragmentation of natural and semi-natural habitats and to highlight the importance of biodiversity in territorial planning. The overall objective is to preserve and restore ecological networks in France, consisting of biodiversity cores and the corridors linking those cores (the term reservoir is also used). Biodiversity cores are areas where high levels of biodiversity still exist. They serve essentially as habitats where species can develop and reproduce. The corridors are used primarily for movement by species from one core to another. Movements may be routine (e.g. often repeated) or less frequent (e.g. for dispersal of populations or migration). Within ecological networks, rivers and streams play a particular role in that they serve as both cores and corridors. 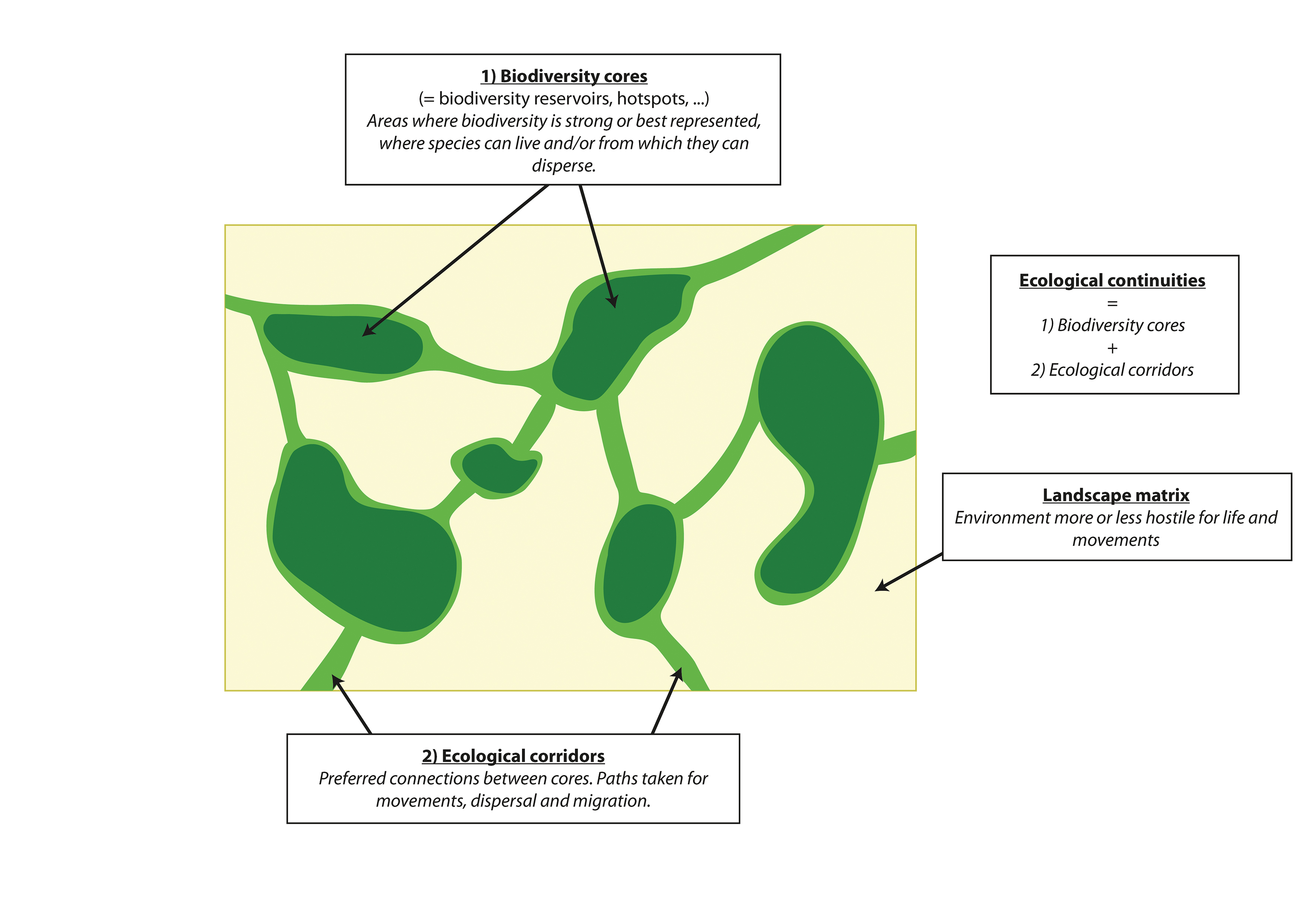 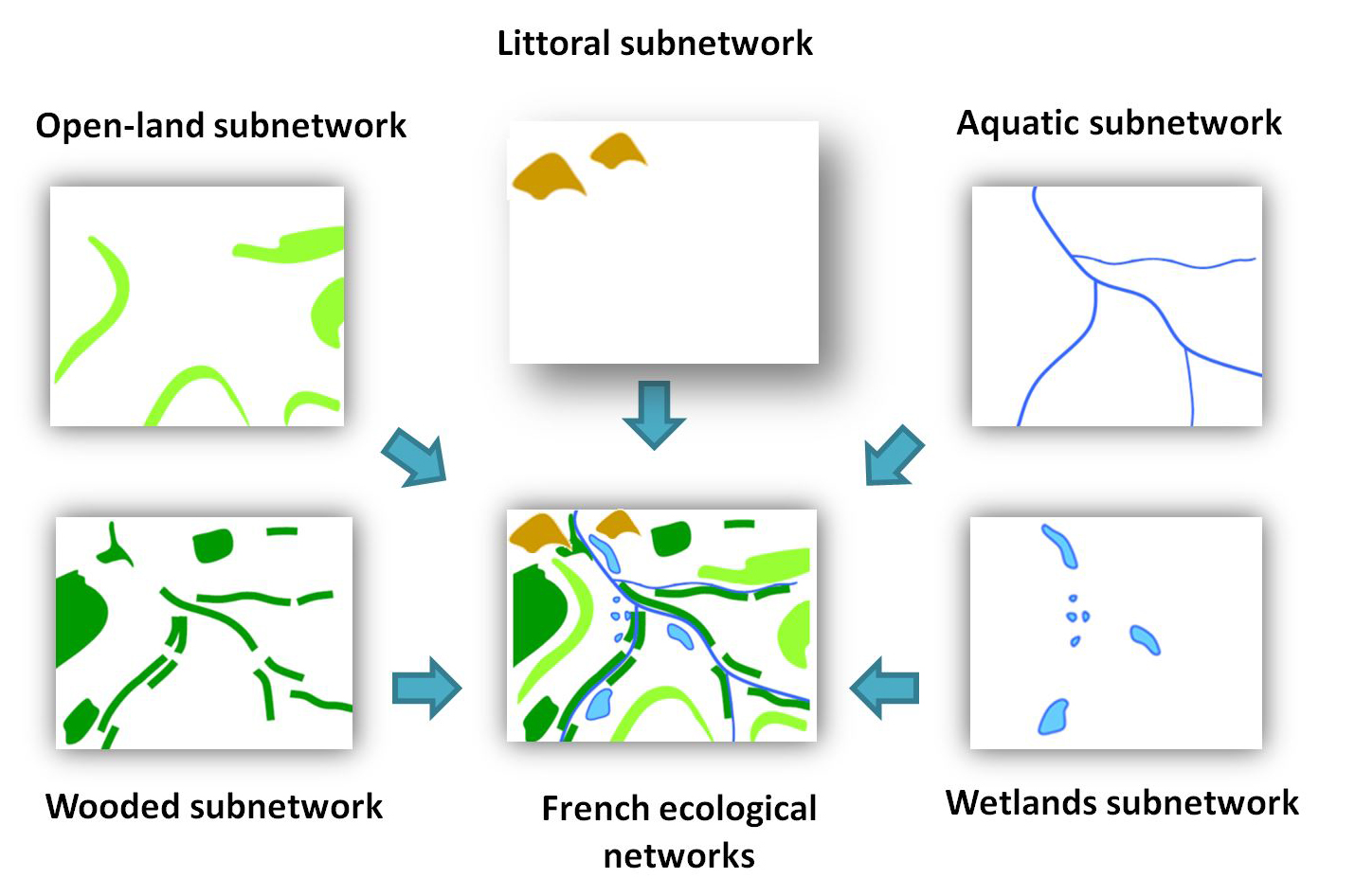 These three levels are linked in that a lower level must respect the guidelines set by the level above it, i.e. local zoning documents must comply with the regional SRCE and each regional SRCE must take into account the national guidelines (ON-TVB).

The “NOTRe” law on the new territorial organisation of France, voted in 2015, stipulates that the SRCE will be replaced in 2019 by a new, integrated plan for each region, the Regional plan for sustainable development and territorial equality (SRADDET). The maps on regional ecological continuities will be appended to the new plans. However, the SRCEs remain valid until the SRADDETs are approved in each region. 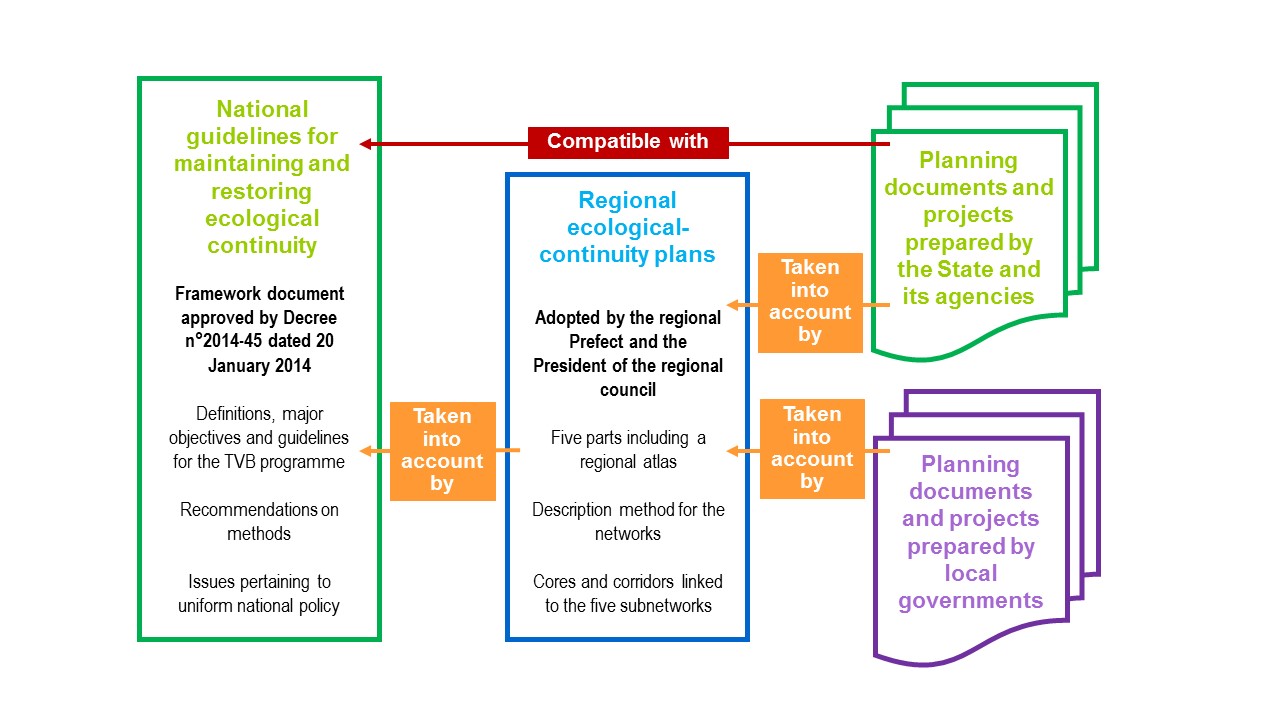 Figure 3 : The different territorial levels for TVB implementation and their links (© UMS PatriNat)

More information on the TVB programme

The National museum of natural history has been involved in the TVB programme for a number of years. Via its Natural heritage department (SPN) and now via the UMS 2006 PatriNat research unit, the MNHN has been a participant in the TVB resource centre created in 2011. The centre assists the Ecology ministry in implementing TVB policy. In addition to the MNHN, other participants in the centre are the French biodiversity agency (formerly Onema and ATEN), the National institute for research in environmental and agricultural science and technology (Irstea) and the Centre for research and science-advice on environmental risks, mobility and territorial planning (Cerema).

In this role, the MNHN participated in establishing the national guidelines (ON-TVB) for the TVB programmme. It also took part in the technical and scientific monitoring of the SRCEs. The ministry also assigned the MNHN the task of centralising, standardising and disseminating the data drawn from the SRCEs.

More information on the website of the TVB resources centre